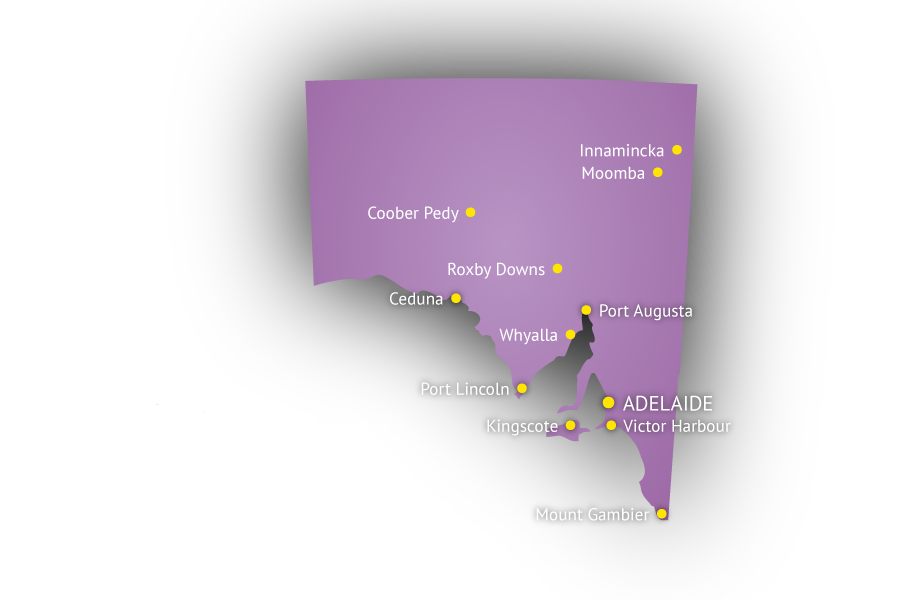 South Australia occupies the southern central part of Australia and in its central and northern parts, covers some of the most arid land in the country. The capital, Adelaide is located at the southern end of the state on the Southern Ocean. Beautiful natural features of the state include; unique desert landscapes, the magnificent Flinders Ranges National Park north of Adelaide, the famous opal mines at Cooper Pedy and the southern coast including Kangaroo Island, home to rare wildlife. South Australia is also known for its beautiful and extensive wine regions to the south and multitude of cultural events occurring year round.

Great places in South Australia to live and work

Adelaide, with a population of just over one million is city of festivals and wine. Nestled at the foot of the picturesque Adelaide hills (perfect for a Sunday drive and a long lunch), Adelaide is the gateway to literally hundreds of wineries located in such famous regions as the Barossa Valley, McLaren Vale and Coonawarra. The city hosts major cultural, arts and sports festivals throughout the year and the beautiful beaches of the southern coast provide a playground for swimming, diving, fishing and boating year round.

Mt Gambier is the second most populous city in South Australia with a population of 27,756. The city is located on the slopes of Mount Gambier in the south east of the state, about 450 kilometres (280 mi) south-east of Adelaide and just 17 kilometres (11 mi) from the Victorian border. Mount Gambier is famous for its ‘Blue Lake’ which changes colour dramatically from grey to bright blue for 3-4 months each year. The city also boasts beautiful parks and gardens, caves and sinkholes.

Visit other states and territories.